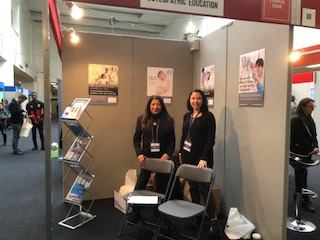 The National Careers Guidance Show, in Olympia was held on 28th February 2018. This year the weather played havoc and many who normally would have attended could not attend. Train and bus transport from outside London was almost non-existent and many of the stands stood empty for the first couple of hours that morning.  Even those of us who came from London had to brave the snow and rain to get there.

The NCGS gives us a great opportunity to inform Career Advisors about osteopathy as they in turn inform their students and draw interest to the profession.  Many who come to the show were unaware of the existence of osteopathy as a profession.   Our information was freely available to them and contact details were exchanged for further talks in the schools and higher education centres.

Although attendance to the NCGS was very much down this year at the start, it picked up eventually and was a good day for all involved.